One late night in the middle of a dream an old White Polish woman told me that this was my world. Yes, she did. She was just there knitting and sitting in a silver rocking chair on the side of my bed covered with the letter X. She wore a red scarf tied under her chin and those orthopedic stockings that old women used to wear. She had on a white dress covered with smaller Xs and a warm matching shawl hanging delicately over her shoulders. She smelled of jasmine and lemon grass. She sat there like she was always there.

She told me that I was the keeper of every valley, every tree, and every butterfly. She told that me I was the keeper and part of every seed that sprouted and every wave that moved across the ocean. And then for a second, she would pause to knit another stitch. She told me that this was my world and that all the people were relatives of this great earth. In the book titled Seven Secrets of Success, Dada Madhuvidyananda , “We then think, feel and act for the welfare of all beings”(p.29). He explains that for one to have balance and success they must act with a kindness to all. She told me that the more that we loved and respected one another the more we would remember who we really were and why we were here on earth. The old White Polish woman told me that love had to start with self-first or it would not be effective.

She told me that we all had signed a contract to come to this great land and that we knew each other before we arrived but had forgotten all that we came with when entering this dominion. We were spirits having a human experience. She rocked in silence again, knitting unknown colors, and then she began to tell me that I had everything that I needed to fulfill my end of the deal. She told me that if I remained willing, I would remember all of who I was before, because this was a part of the great mystery of life on earth.

She went back into her silence rocking and knitting as if she were listening to instructions from some other place that I did not know about. Suddenly, she would slowly open her eyes and begin to instruct me on the beginner’s guide to “How to Save the Earth in Your Lifetime.” She said that all this could really be done if all of us were willing to walk past fear, past false mythology. She said that we had to be willing to critically think and diligently question all situations with faith as the foundation. She said the key for us would be to follow the still small voice inside.

She rocked back into her silence as I waited patiently for her to continue to tell me what I was to do while being a keeper of the earth. She said that all people no matter what their difference were leaders of the earth. She said that the act of remembering would sometimes feel painful for most of us because it would call forth a level of honesty that would radically change our lives. She said that it would feel like a birthing and that a lot of us would resist and die without ever knowing who we really were. She continued to rock like she had always been there.

This story is dedicated to Ms. Anne who was my grandmother’s Polish friend. She was an immigrant with memories of Hitler, struggle, and demanding work. She owned a Polish bar not far from our house. She would share a shot with my grandmother as she poured ginger ale for the little colored girl sitting on the bar stool.

This is for you Ms. Anne and all the hard-working Polish women that I grew up around in McKees Rocks and Pittsburgh, Pa. I honor your spirit and kindness. A deep bow to you and your kind.

Hitaji Aziz “Angels speak to me and through me every day” 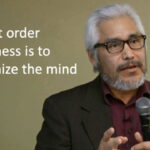 The Story of Vision Quest : by Dr. Michael Yellowbird

Testimony of the Righteous, In honor of Larcenia Floyd, Mother of George Floyd 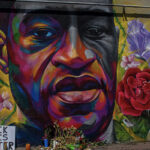